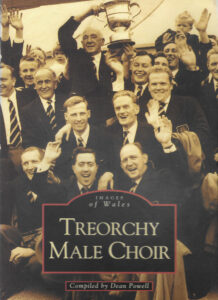 The internationally celebrated Treorchy Male Choir has enchanted audiences around the world for more than 130 years.From their Royal Command Performance for Queen Victoria to their appearance at the Royal Variety Show more than a century later, the Choir continues to entertain to celebrated packed houses.

The most recorded male voice choir with more than ninety albums to their name, Treorchy enjoys an unbeaten competition record and has performed with Tom Jones, Ella Fitzgerald, Julie Andrews and Shirley Bassey.

The Choir has undertaken an enviable number of overseas tours, including two visits to Canada and four tours of the USA followed, with visits to the White House and performances in San Francisco, Denver, Seattle and the Mid West.

Treorchy became the first Welsh choir to appear at the Sydney Opera House and made three further visits “down under” and a triumphant sell-out concert tour of New Zealand.