A ROYAL CHOIR FOR WALES 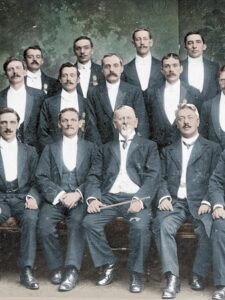 Victorian Wales was a heartland of competitive choral singing, galvanised by a musical intensity the likes of which had never been witnessed before. For more than a century, the industrial valleys was a the volatile melting pot of a culture inspired by the sound of people united in song.

Arising from the need to  express religious fervour or to rise above hardship and poverty, choral singing converted even the most revived Nonconformist  into  tribal warfare in the competition arena.

This is the story of three Welsh conductors, the choirs they formed, the battles they fought, the overseas tours they led and the deep desire to win the approval of the Queen Empress of Great Britain and her Colonies.